I have been enamored with The Mandalorian from the Disney Star Wars series.  I have finished all the season “chapters” as they are called and await this fall when the new new season comes out.  Ugh only one season a year.  But while I wait, I bought a Mandalorian stitch markers set with a Yoda progress keeper.  I got them from Adoreknit and as usual they are wonderful.  She even gave me an extra progress keeper that has the Mandaloian helmet in color and a stitch marker holder to keep them safe.  She is a great maker!

It’s Spring here but not, I have seen a few Robins, no pictures yet, might not happen this year, go into that later.  I have seen the Geese coming back, but because I live in the mid-west, Mother Nature said it’s not Spring until she says so and she sent us more snow last Saturday.  It was raining today.  Spring will be here sooner than later tho :).

The Saturday before last I went to a fairly local fiber fair with my son and his spouse.  Picture shows part of their set up and I have a picture of my son using his new sock knitting machine.  He loves it and makes a pair of socks pretty quickly :).  They had me bring my more portable Rick Reeves spinning wheel and spin while I was there.  Almost finished with bobbin number 1 of the Alpaca/wool blend I was spinning at the Mall fair in Dec (yeah I’m a slow poke sometimes) then I will spin another bobbin and ply a skein of yarn :).  It was a fun day.  This wheel spins very well and I’m enjoying the experience on a double drive wheel.

I did get another charity hat done, but haven’t gotten around to getting a picture yet.  Caught another cold about 3 weeks ago (does that make 4 or 5 this winter?) and just dealing with some bronchitis now.  It’s not as bad as usual but I haven’t felt like doing a lot.  I’m doing my best to stay inside because of that dang virus going around (that is why I don’t have any first Robin pictures, but I’ll keep trying), tho once in a while I remember something I forgot at the grocery store, I try not to go, but you know how it is :P.  I was able to start and finish all of the 2 seasons of Lost in Space.  It was pretty good but oh my gosh the new season doesn’t start until next year!  All these one season a year shows will make our heads explode!  In the mean time I’ll just re-watch Merlin, Harry Potter, Star Wars, and the Star Trek series, at least they are all finished and aren’t going anywhere.  I do enjoy a good marathon from time to time :).

Almost forgot to wish everyone a Happy Leap Day :).  I won’t say how many I’ve seen in my life, but it’s nice to have an extra day :).

Here is my latest finished charity hat.  Love the way the colors came out, hope it will be loved.  This was I Love this Yarn in the colorway Strawberry Jam.

I have started the next hat with the skein on the left.  These are quick and mindless knits but very purposeful and useful, to both the receiver and the giver. 🙂

Hope you all had a wonderful Leap Day 🙂

The second picture is a newly finished charity hat and the skein on the left is for the new charity hat that I have just cast on.  The color is pretty, I’ll try to get a picture posted in the next week or so.

Hope everyone had a wonderful Valentines Day, even if you are single, treat yourself to something special, you are worth it, honest!! 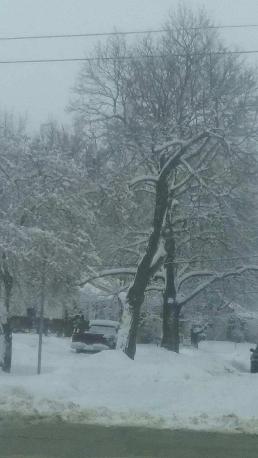 I meant to post this earlier but got sick, and now I have a pinched nerve in my lower back, ugh.  Anyway this was almost 2 weeks ago, I think we got about 4 inches and on top of the snow we already had, we had about 6 inches on the ground.  Much of the snow is melting because the last few days have been above freezing and today it got up to 50!!!  It’s our normal mid winter thaw.  But colder temps are on the way and more snow, sleet and freezing rain, sigh.  BUT, March is right around the corner.  I know in the mid west, where I live that doesn’t really mean anything we can get snow into May, tho’ it’s usually done in April, 😛  but after this month the really low below 0 temps will get better.  So far it’s been a fairly mild winter, not to many below 0 temps, certainly not like last winter :).

Today was a Palindrome date, that is when the date looks the same forward and backwards :).  02/02/2020.  Just a cool little informational note :).

I finished my Charity hat and have begun a new one.  I wanted to cast on a new project, not quite sure what yet, but held myself back from starting a real project (only working on Charity knits because I need to be knitting on something) because I need to finish spinning the yarn I’m working on for a hat for a family member, I promised so I couldn’t very well let it go anymore.  I was very sick last week with a horrible head cold.  Feeling much better, just a little cough now.  So starting tomorrow I will begin to spin on that project again. I have one bobbin done just need to start and finish the 2nd bobbin and ply them together, then dye the yarn and knit a hat :).  More on that as I get there.

I have had a Christmas cactus, that was given to me by a friend, for about 6 years.  It had never bloomed so I just kept it around because I like plants and a friend gave it to me.  I was so surprised to see blooms on it two weeks ago!!!!  Guess it isn’t sure yet when Christmas is :P, but that is ok, it looks beautiful anyway :).

Hope everyone is well and enjoying the fact that Spring will be here in about 6 weeks!! Woot Woot!!

I started these leg warmers just before Christmas and didn’t get them finished in time.  So they are my first FO of 2020.  This is a pattern from Creative Knitting Magazine Autumn 2013, the pattern is called Colorfully Comfortable Leg Warmers by Kathy North.  The pattern has a different cable running down the front but I decided not to add them, they are for a teenager and felt the busy color was enough going on.  I used a size 10 12″ circular (because I didn’t have a size 9 😦 , I can’t remember what the maker of the needle is because I can’t find the package it came in, so unlike me) and a size 9 16″ Knitters Pride Karbonz circular (love Karbonz).  She loves them, hope they help keep her warm on her walks to and from school this winter, we get very cold in Jan and Feb.  Actually it is snowing right now!  Weather said between 1 and 3 inches, I think it will be closer to 1.

Thought this knitting humor would be perfect to start the new year. 🙂

Hope you all have a very Happy New Year and enjoy peace and health!

From the Book of Mormon on Christmas Eve day

“And it came to pass that he cried mightily unto the Lord all that day; and behold, the voice of the Lord came unto him, saying:

Lift up your head and be of good cheer; for behold, the time is at hand, and on this night shall the sign be given, and on the morrow come I into the world, to show unto the world that I will fulfill all that which I have caused to be spoken by the mouth of my holy prophets” 3 Nephi 1:12-13

May you all have a blessed and wonderful Christmas, and may the peace of this season be with you through out the New Year.

Enjoy this video about Christ’s birth 🙂 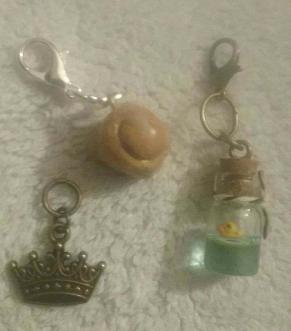 I bought a new progress keeper that I have been saving for.  It is a hand crafted polymer progress keeper.  I bought the little duck in a bottle (looks like it’s swimming in the bottle.)  She buys the bottles but crafts the duck and puts the stuff in the bottom to look like water.  Her crafting is amazing!  She also sent a cinnamon roll progress keeper and a crown stitch marker.  Please go check out her shop CharmingMinisShop on Etsy, you will be amazed at her crafting skills.

I was asked to help a family member at a Mall Christmas craft fair.   His spouse was out of town and he needed help and I happily agreed to help with their alpaca merchandise.  I have included some pictures of his set up and some cute Alpaca stuffies on his table.  The yarn is from their herd.  I did this on Saturday and after Church on Sunday.  It was fun, I was encouraged to bring my spinning wheel to spin there, so I brought my Rick Reeves Wheel, which allowed me to get some spinning practice on it. 🙂  Since it is a double drive wheel, and I’m not real practiced on those (I’ve always used a scotch tension drive) and since alpaca is a slippery fiber, I blended some alpaca with a little wool on my blending board so that it was a little more grabby and easier to spin on a different wheel.  Went well :).

Hope everyone is having a great December :).

I finished the Flax infant sweater by Tin Can Knits.  Love her design, knit from the top down and no joining or sewing up seams, perfect!!  Wish to colors showed up better, I seriously lack photo skills!  It has light blue, pink, purple, green and yellow.

The 2nd picture is a musical clock that I received as a gift on Thanksgiving.  My son’s mother-in-law and I exchange gifts on Thanksgiving and this was the gift she gave me.  My eyes almost popped out of my head, I love it so much.  It plays music on the hr and turns off the musical chimes when it’s dark so it won’t wake you up, how is that for awesome.  I gave her the Changing Stair Cases shawl  I had been knitting for her, hehe, she was also very excited :), lace shawls will do that ;).  Life is good :P.  I’m still working on some Charity hats, but I need to pick my next project.  Well actually I think it has picked me and I need to finish my spin for the hat I’m making for my family member.  I will have some time later this week to work on finishing it.  Hope everyone has a great December, only 3 or 4 more months (depending on where you live) until Spring :P.